There was not an empty seat or dry eye in the house as hundreds of women gathered on Monday morning, August 9th, for an incredible event. Moderated by Rachel Tabush, the Elaine and Nathan Shalom Fertility Division of SBH compiled a panel featuring women who have experienced different challenges on their journeys toward building a family. The strength the panelists displayed in sharing their most personal and emotional stories is unparalleled, and the audience was hanging on every word. A beautiful breakfast was offered to all attendees, and a spectacular auction prize was raffled off, both of which made the morning even more special.

The event began with Mr. Ronnie Tawil who perfectly kicked off the day with an inspiring and poignant introduction. Next up was Rachel Hazan, whose tireless efforts made this division of SBH such a success. She mentioned the many volunteers who so willingly give of their time to make such an event possible. Rachel Tabush then took the stage, sharing a small part of her personal journey and her involvement in getting the support she needed.

Stephanie Harari, the first speaker spoke about her battles with infertility, having had her first set of twins through IVF and then a second set through a natural splitting of the embryo. Hopefully her story will remind people to think twice before asking someone, “Do twins run in your family?” Next up was Roxanne Maleh, who has been blessed with four beautiful girls. But the fact that she has had as many miscarriages as she has children, in addition to giving birth to her youngest daughter at only 25 weeks, is a challenge she will live with forever. Barbara Sutton spoke next about her difficulties giving birth to her three children and the resulting postpartum depression she experienced. “I don’t remember anything about the first year of my son’s life” was one of the feelings that pushed her to get help. Barbara reminded us if your gut tells you something is not ok, listen to it; don’t let anyone convince you that it’s just “baby blues.” There is no shame in getting help. Jaclyne Shalom spoke of her multiple rounds of unsuccessful IVF treatments, and the depression and sadness that can bring upon a woman and her existing family. The last speaker of the day was Rachel Rudy, who experienced the inexplicable pain of knowing that something was wrong with her baby in utero and carrying it to term, knowing that her child was unlikely to survive more than several hours after coming into this world.

Mrs. Molly Haber also shared a few words about her personal experience and her involvement in SBH. She reminded the audience how subjects like infertility and loss were almost never mentioned years ago, even between a mother and daughter. SBH has now expanded their services to include an extensive pregnancy loss support program, with over 30 community volunteers specially trained by Knafayim.

The community is so fortunate to have the SBH Fertility Division bringing these stories to light, and helping women to realize that they are not alone. There is always someone to help, either with a referral or just a listening ear and a supportive attitude. 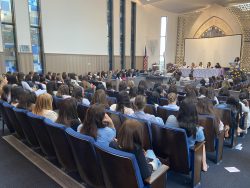 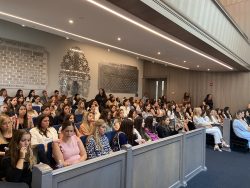